A different style for each one:

Once again I have to comment on this gorgeous golden Magnifico #2062 thread. This is one of those threads that looks not so good on the spool but works marvellously with lots of different fabrics.

Posted by Razzle Dazzle Quilter at 7:10 PM 5 comments: Links to this post

Golly I haven’t typed that for awhile! I actually attended the gathering today. It was nice to be with all the Sweet Peas again.

We had some nice show and tell. Let me share:

Debbie watched a video from the Missouri Quilt Company the other day and just had to make cushion using their technique:

Peggy showed her taggie cuddle quilt. This has Minkie on the back, so soft.

……and of course because it is Margaret’s quilt there has to be a pussy cat:

Mary and Rochelle have both made modern style baby quilts. Mary’s yet to be quilted, Rochelle’s totally finished – completed with magic binding.They both look very pretty and fresh.

Thanks for popping by.

Posted by Razzle Dazzle Quilter at 6:23 PM 5 comments: Links to this post

Our eldest brother Norman turned 70 today. He is a modest kind of guy who insisted that no fuss be made. He was heard to mutter more than once that another year was just another Millstone around his neck, We kept saying it was a Milestone not a Millstone.

So here it is, his Millstones and Milestones quilt.

Peggy pieced the top, I quilted it and Peggy applied magic binding. 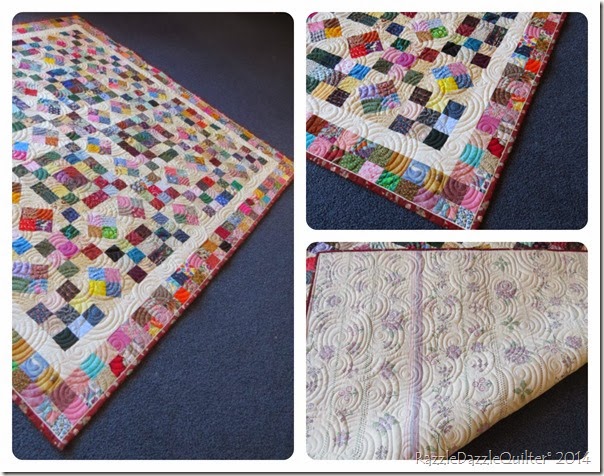 Posted by Razzle Dazzle Quilter at 7:30 PM 12 comments: Links to this post

We have some lovely pink things going on in our garden. Our Silk tree has grown a lot since we installed its own personal watering line last summer and the Cosmos at the front door has gone totally out of control!Mary rose continues to bloom abundantly.

The bees think it is wonderful.

Kaiser doing his “Oh woe is me, let me in under the quit”. Koko doing her grumpy “Oh no, not on your nelly” look

He’s a top cat our Kaiser

Speeding my way through a quilt which must must come off the frame to day to be bound and ready to post tomorrow.

All and all it’s a good Sunday. How’s your day going?

Posted by Razzle Dazzle Quilter at 2:19 PM 7 comments: Links to this post

It’s a been awhile since I have quilted any of Maxie’s  wee quilts. They are the perfect size to pop on the frame side by side.

I have to be careful to find a thread that will look equally good on each quilt. In this instance I selected Superior Magnifico # 2165 Stainless Steel.

It’s fun to change patterns a little from quilt to quilt too.

I have three on the frame now. I’ll share with you when I complete.

Thanks for popping by

Posted by Razzle Dazzle Quilter at 7:04 PM 4 comments: Links to this post

I joined in Cat’s Sew Sweet Swap.I was partnered with Julie of Julie Lou. Julie is obviously a perfectionist! Her attention to detail is amazing!

Look at these items close up:

Look at the hand stitching on the pouch, even the tassel is a blend of colours. The card made with card stock to match the fabric even inked on stitches. Inside lined with very pretty vintage sheeting.

Shall I show you what I sent to Julie? 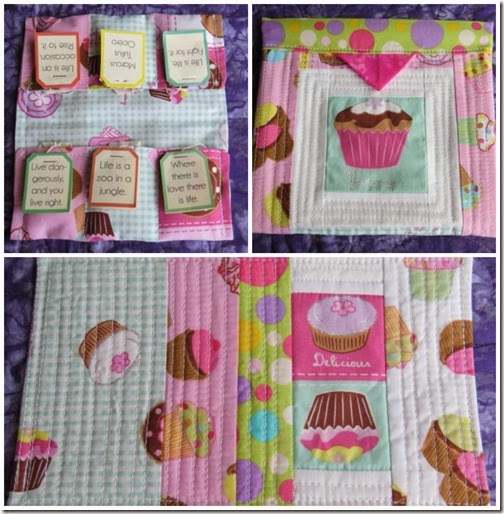 Tea bag wallet, snap happy purse and mug rug.The tea bag tags can be found at ShrimpSaladCircus. I’m adding links just in case you want to make any of these things.

……and of course the parcel wouldn’t be complete with out a few extra Sweet Treats:

Cat, thank you for organising this swap. Cat seems to organise a few swaps through the year so if you would like to join in the fun make sure you follow her blog.

Julie thank you for being such a super swap partner.

Posted by Razzle Dazzle Quilter at 4:06 PM 6 comments: Links to this post

Sally made this quilt following a Mystery Quilt pattern created by Bonnie Hunter.The pattern is called “East Street”. Sadly it is no longer available on line.

Sally and I discussed her quilt and agreed it would look great with all over spirals. I love that moment when stitches start to go into a quilt. The texture changes the look of the top so much.

Sometimes the spirals fall on blocks looking like they are in just the right place.

The texture looks great on the back.

One more pic – just because I can. 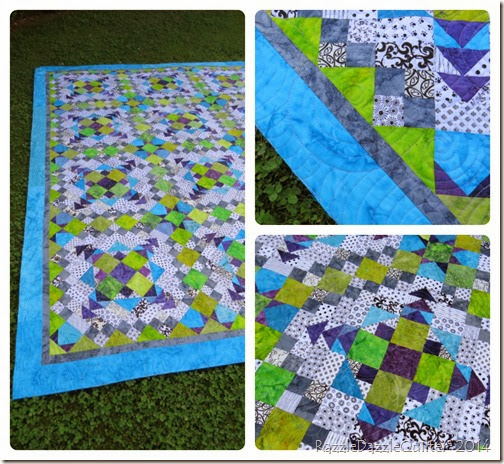 Thanks for asking me to quilt for you Sally.

Posted by Razzle Dazzle Quilter at 7:49 PM 12 comments: Links to this post

…….that brighten a day

Bright flowers from a friend’s garden. Thanks Margaret. 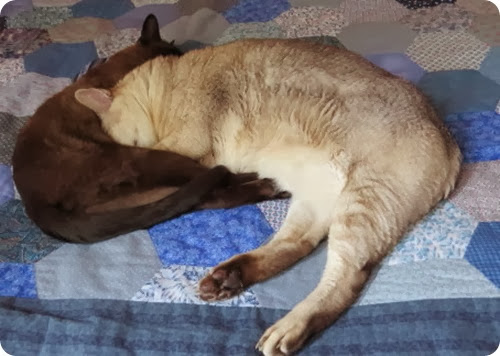 Our hydrangeas are producing some glorious colours

Last but not least our glorious mountains early this morning 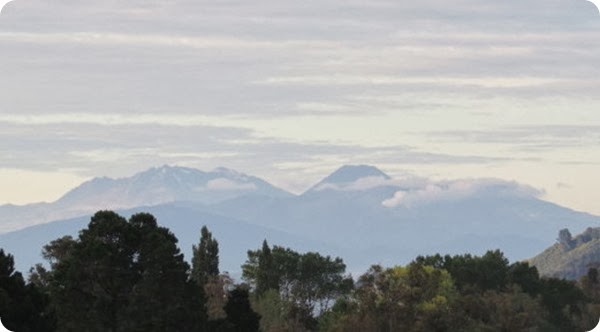 Thanks for popping by

Posted by Razzle Dazzle Quilter at 7:40 PM 8 comments: Links to this post

Email ThisBlogThis!Share to TwitterShare to FacebookShare to Pinterest
Labels: Cats, Gardening, It's the little things

I always wondered how New Zealand Day morphed into Waitangi Day.  I well remember when Norman Kirk (Big Norm) announced we would have a National Day.

I felt it was a great idea to encourage National pride. With the change of title our National Pride day seems to have turned into a National Day of guilt, sack cloth and ashes. How sad that something we all could have celebrated and been proud of was snatched away from us.

I found this information on Wikipedia.

For Norman Kirk, the change was simply an acceptance that New Zealand was ready to move towards a broader concept of nationhood. Diplomatic posts had for some years marked the day, and it seemed timely in view of the country's increasing role on the international stage that the national day be known as New Zealand Day. At the 1974 celebrations, the Flag of New Zealand was flown for the first time at the top of the flagstaff at Waitangi, rather than the Union Flag, and a replica of the flag of the United Tribes of New Zealand was also flown.

The election of the third National government in 1975 led to the day being renamed Waitangi Day because the new Prime Minister, Robert Muldoon, did not like the name "New Zealand Day" and many Māori felt the new name debased the Treaty of Waitangi.[3] Another Waitangi Day Act was passed in 1976 to change the name of the day back to Waitangi Day.

All of  this made me think of a poem my Grandmother Susan Dassler wrote many years ago about Kiwis.

Why are we labelled Kiwis?

Where can we place the blame?

What charms has this unlovely bird,

That we should take his name?

He cannot fly  with ne’er a wing,

He has no voice – he cannot sing

No song of joy, no liquid note

Has ever issued from his throat.

He’s down-to-earth, and drab and shy

And he ne’er looks up towards the sky

He has no tail to flirt and spread,

To lure a mate into his bed.

He shuns the day, and while it’s light,

He sulks and lurks beneath the scrub,

But digs and delves throughout the night,

And he thinks of nothing but his grub!

He’s really neither smart or nimble-

Why do we make him our symbol?

Upon one point you’ll all agree-

He is UNIQUE and so are we!

Grandma Dassler was a prolific writer. In hard times she wrote to earn money. The 2s 6d or 5 shillings she might be paid for a poem or a small story that was published helped to keep things going. I believe she wrote this poem for a Great Grand Daughter who was going overseas as an American exchange Student.

PS If you would like to use this poem please acknowledge where you got it from – and Grandma D of course!

Posted by Razzle Dazzle Quilter at 8:04 AM 4 comments: Links to this post

Riverview on Robinson - more than just a room

Come and share the comfort of our home. Our guests have a bedroom, bathroom and mini lounge for their exclusive use. Our place is close to Taupo Town Centre. A five minute drive to the shops or t...

Razzle Dazzle Quilter
I live in beautiful Taupo, New Zealand with my sister , two fur persons (cats). I have three brothers and three sisters. I have been patch working and quilting for over 30 years. My passion is machine quilting. Quilting is the music of my life. I quilt all my own quilts. I also quilt for other people. If you like my style and would like me to quilt for you please click on my Machine Quilting Tab for further information.